Why we get less than satisfactory service most of the time.

If you sit down and think of possible reasons why we get service that is not up to the mark most of the time, you probably would draw several conclusions.

Research has shown that most companies hire the wrong people for the all important task of dealing and communicating with customers. And most of them are lowly paid and undergo little or poor training programmes.

To add to the bad news, staff do not get recognised for their good work and often incentives for them are non existent.

As a result of these, we the customers get the short end of the stick. Most of the time.

We become miserable because of poor service standards being provided time and time again.

Remember, customers will give up on a company and their products once they have had enough. And they won't tell you first because they think they will be wasting their time.
Posted by ZG at 4:04 AM 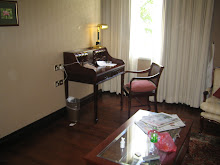